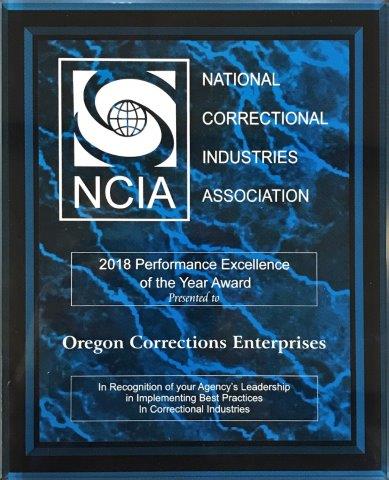 "Together, we are changing lives, one opportunity at a time."
The National Correctional Industries Association (NCIA) is an international nonprofit professional association whose members represent federal, state, county, and international Correctional Industry agencies, as well as suppliers and partners in apprenticeship and work programs. The NCIA website states, “Every year, NCIA makes a special effort to acknowledge individuals whose extraordinary skill and leadership in their respective programs improve Correctional Industries as a whole." These awards are presented in April at the Annual National Training Conference, where organizations come together to learn from each other and make connections which prove invaluable throughout the year. In each of the previous two years, a staff of Oregon Corrections Enterprises (OCE) has received an Honor Roll award: Barbara Cannard in 2016 and Kevin Thompson in 2017. In 2018, OCE was acknowledged once again as staff member Benjamin Noid received an Honor Roll award. Last summer, NCIA announced a new award category which would acknowledge an agency as a whole. Called the Performance Excellence of the Year Award, the intent was to honor an agency who had excelled over the last three years in at least two of NCIA's ten listed best practices for Re-entry-Focused Performance Excellence:

Able to show achievement or progress in eight of the ten best practices, OCE was declared the recipient of the first-ever NCIA Performance Excellence of the Year Award. OCE Administrator Ken Jeske accepted the 2018 award on behalf of all of the employees of OCE, its public and private partners, and the adults in custody participating in OCE programs. He concluded his acceptance speech with these words:

“Thank you for acknowledging OCE's work over the last three years. None of us can do this great work by ourselves. To the adults in custody in our programs and the staff of Oregon Corrections Enterprises and the Oregon Department of Corrections, the OCE Advisory Council, the staff of Mass Ingenuity, and the staff and members of NCIA, I say this award belongs to all of us. Together, we are changing lives, one opportunity at a time."