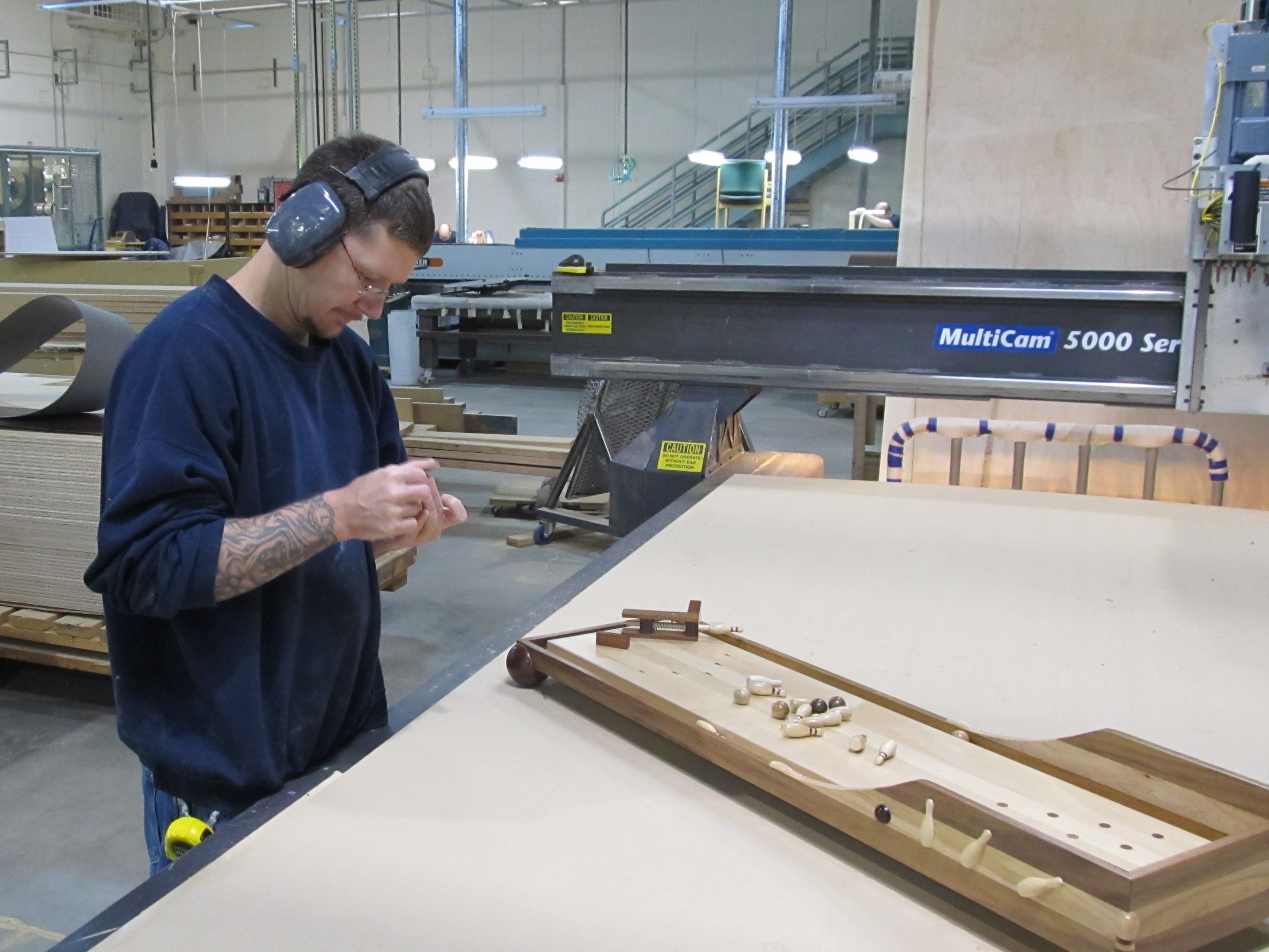 Woodworking His Way to a Better Future
02/14/2020
Posted By: DreamingCode Admin

Untapped talent turned to new hope for what lies ahead – that is the story of Jeff Lumpkin. Lying dormant beneath a need for opportunity and barriers resulting from avoidable choices was his path to a better life. Though Jeff is currently incarcerated, the discovery of his rich abilities has helped him redefine how he sees himself, how his family relates to him, and what his future now holds.

Jeff Lumpkin began his passion for woodworking five years ago in the Oregon Corrections Enterprises (OCE) Upholstery Shop located at the Two Rivers Correctional Institution (TRCI) in Umatilla, OR. Assigned to work in the milling department, he was a quick study and hungry to learn more. Prior to working for OCE, his level of experience was a grand total of one school year of junior high wood shop. Having to first relearn to measure and cut, he has since grown into a milling expert, and now a CNC router machine operator.

Each year the OCE furniture factories have opportunities for the adults in custody (AICs) to stretch their creative muscles by designing and building items outside of standard OCE products. Jeff fully utilizes these opportunities and is the mastermind behind several incredible woodworking projects, considering he is working with scrap wood and fall off materials. This year's undertaking began as a project in a magazine. Where it has ended up is a finished product that will be offered for sale on the Governor's Food Drive Auction, proceeds going to the Marion County Food Bank to feed those in need. 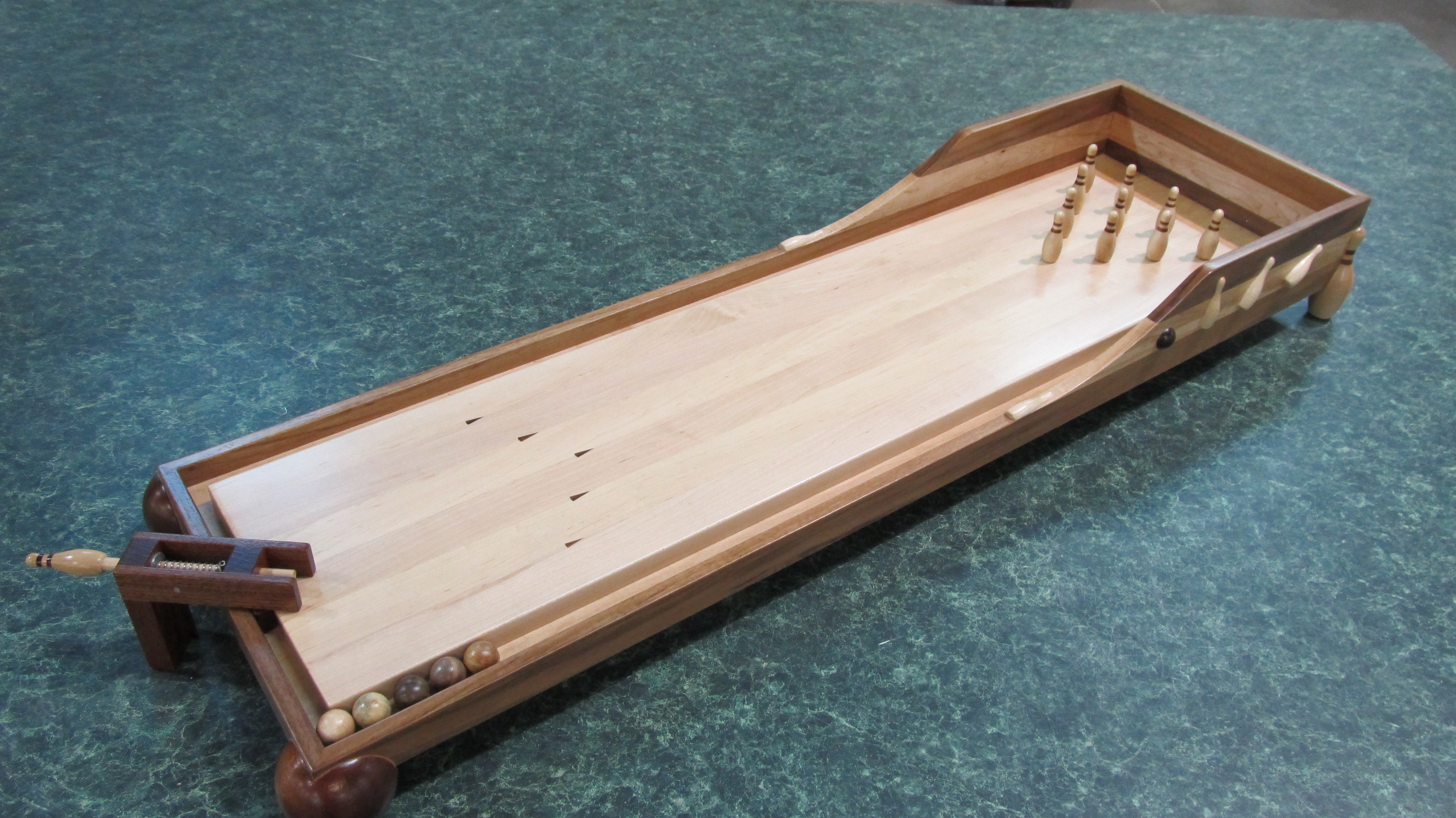 Growing from the initial concept, Jeff sketched out his own version of a miniature bowling lane. After receiving the approval from staff to build it, his drawings were turned into 3-D models in CADD and CAM. Jeff and CADD designer Cody Dalton taught themselves how to make spheres on the CNC using 3-D routing techniques. They worked out the dimensions and specs, then programmed and ran half-blocks. Jeff popped them out, sanded them, and glued the halves together for perfect miniature bowling balls. 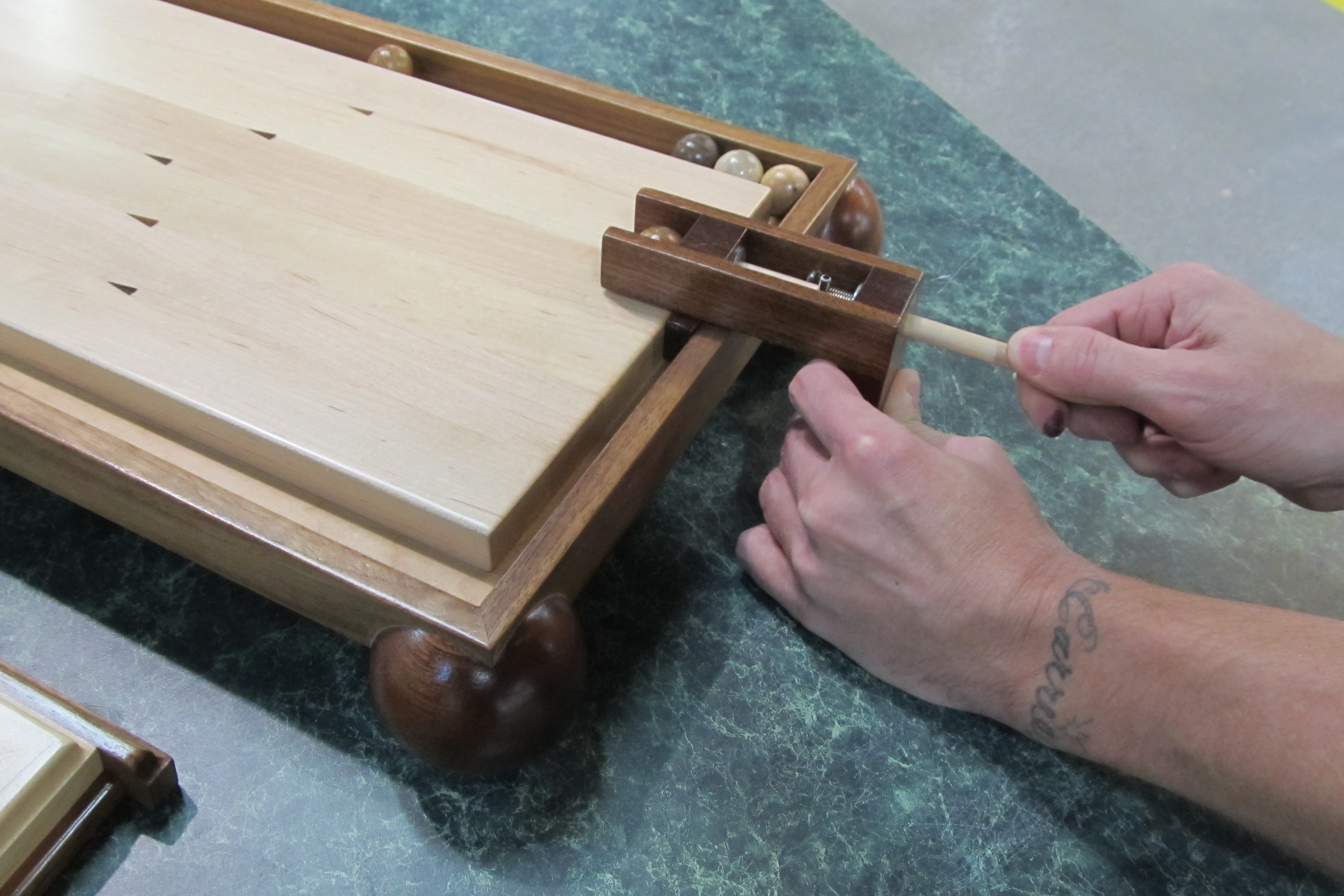 The next challenge was how to launch the balls. To solve this, Jeff brainstormed a pinball shooting mechanism, which is both functional and fun to use. He also created a drawer for the pieces, complete with a dry-erase board backing for keeping score. He took the design to the next level by creating differently-weighted balls for various types of shots and made the shooting mechanism both moveable and removable. Finally, he added gutters and used his bowling pin design thematically throughout the project for handles and 3-D adornment. The finished product is beautiful, and has entertained many a staff member as they passed it while it waited for sale in the online auction in February. 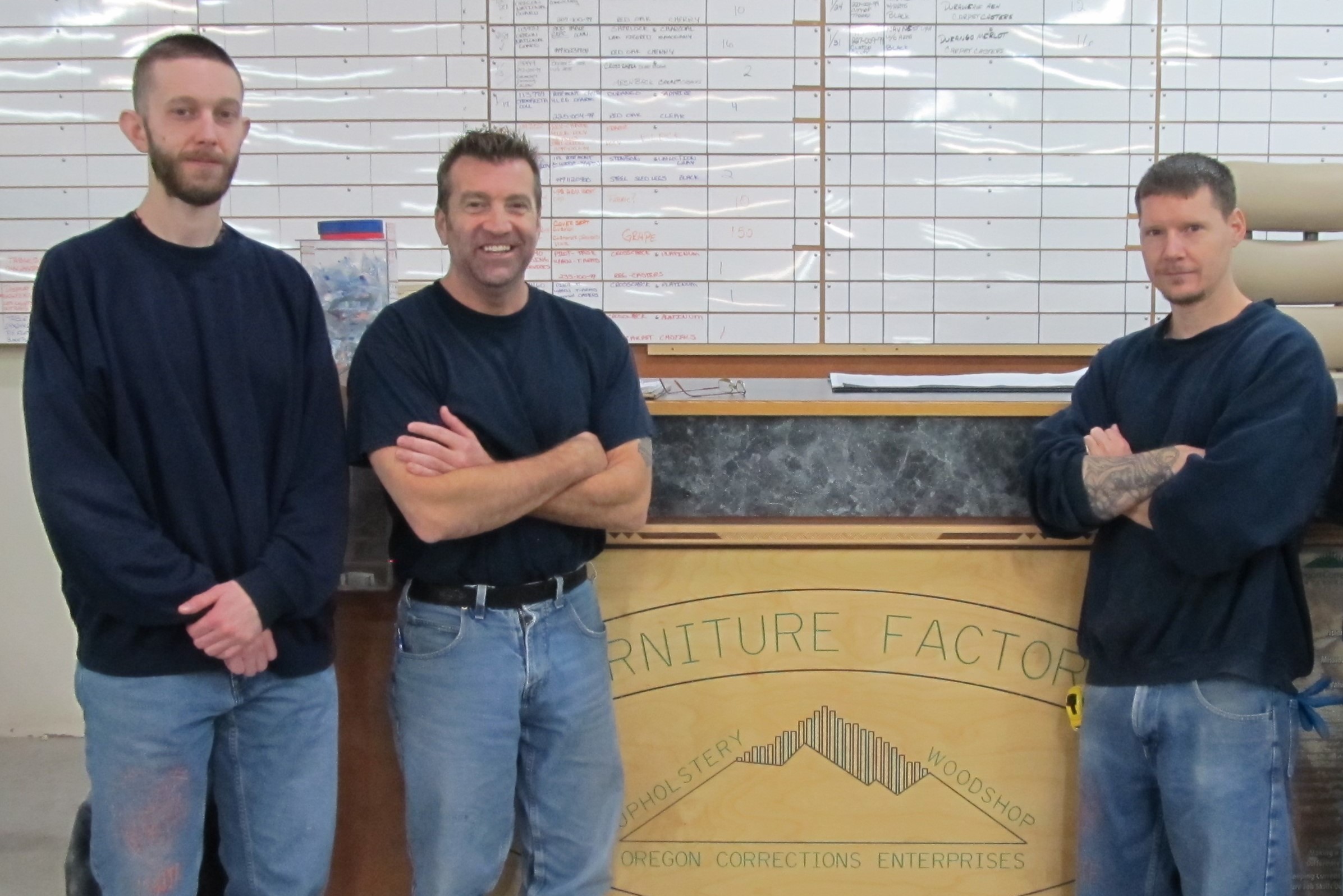 Jeff is quick to credit OCE staff and deflect praise to other AICs who helped him with his projects. He leaned heavily on Cody Dalton and Shane Hall for the complex CADD/CAM work, and Gabe Riley for his abilities in the finish room. This bowling lane isn't his first great project. He previously built a semi-truck and low boy. He began with a two-inch picture from a magazine and made a scaled drawing to start the creation. His father is in construction and drives these machines. Jeff sent him pictures, which led to many great conversations between them. Jeff also made a military jeep and a multi-car wooden train. He was creative in using a drill press as a make-shift lathe to fabricate the intricate parts.

Jeff is extremely thankful for the opportunity he has in with OCE to train, learn, and grow, using the opportunity to create new things. Like nearly all incarcerated men and women in Oregon, Jeff has a release date and will be going home in the future. His rapidly growing skillset has him thinking about the incredible opportunities he'll have to be successful. When he releases he hopes to find a furniture production factory where he can continue his skills. He loves working with wood and would like to make a career out of it. He isn't done learning, though. Jeff would like to learn the CADD/CAM side of the process to add to his new CNC skills, enhancing his ability to find a good job. He desires to maximize this training opportunity to make himself as marketable as possible when he returns to the workforce. He wants to keep expanding and wishes he had discovered woodworking sooner. In his own words, “Maybe all this could have been avoided." He is contemplative, and what he once viewed as restrictive he now sees as a second chance. He is making the most of his opportunity with OCE and is shaping his future through it. 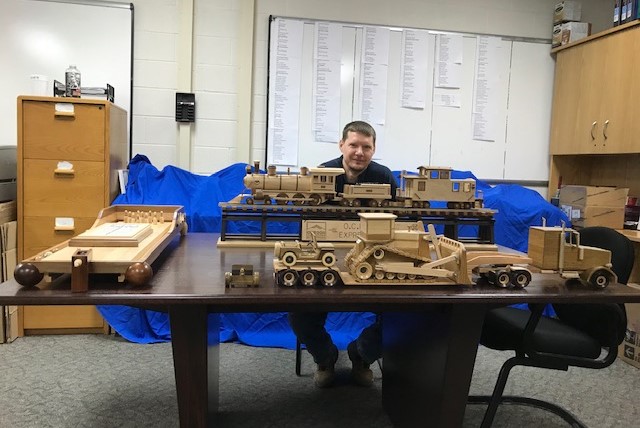 When asked about the future of the bowling lane, Jeff said he would be happy if it was displayed or sold, and is glad to hear it will be used for the auction. He built it to test his creativity and learn new skills. He has moved on to the next project but wouldn't mind making more bowling lanes if asked. He's already working on plans for a potential miniature pool table. One can only imagine how creative it will be.

OCE offers training programs for AICs that teach them the skills to qualify for living wage jobs and better after release. Computer Numerically Controlled (CNC) routers, Computer Aided Drafting and Design (CADD) and Computer Aided Modeling (CAM) - also referred to as Machining or Manufacturing, are three of these programs all mentioned in this story. 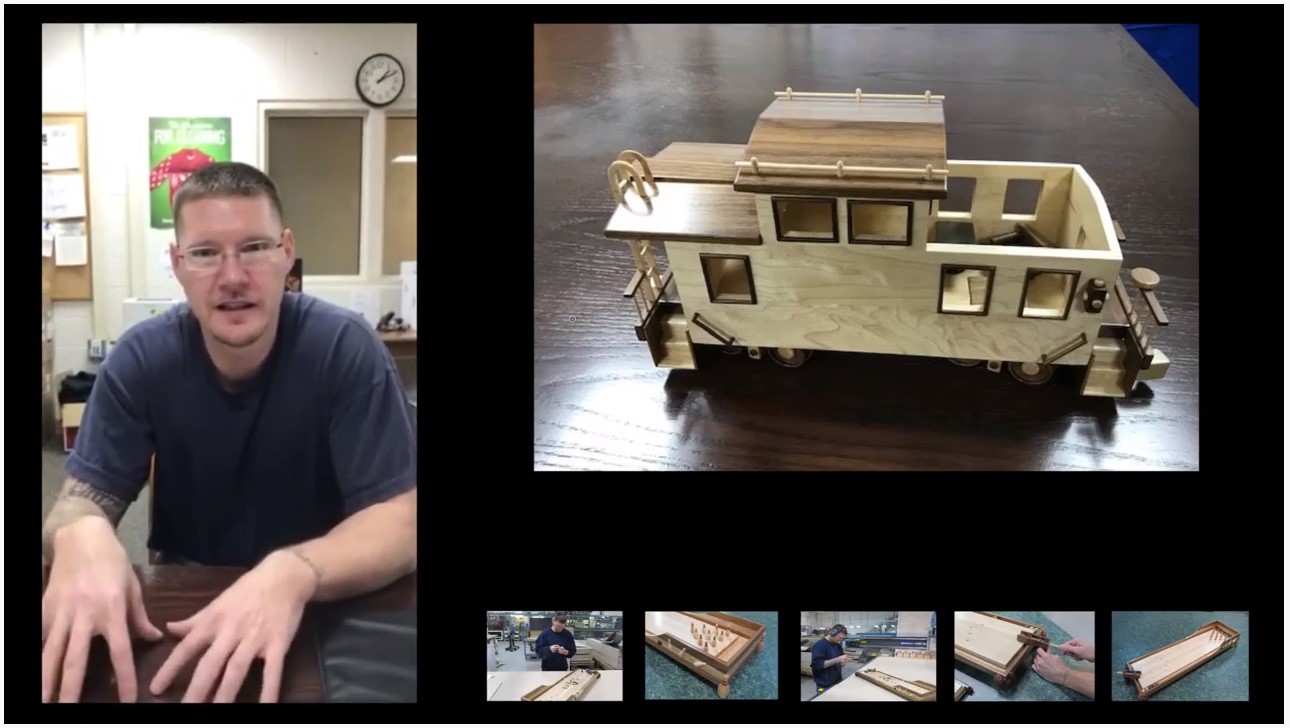 For more information about OCE training programs and certifications, see our OCE Overview Booklet or you can CONTACT US.

Hear from Jeff himself about his goals for the future and how he created this bowling alley. 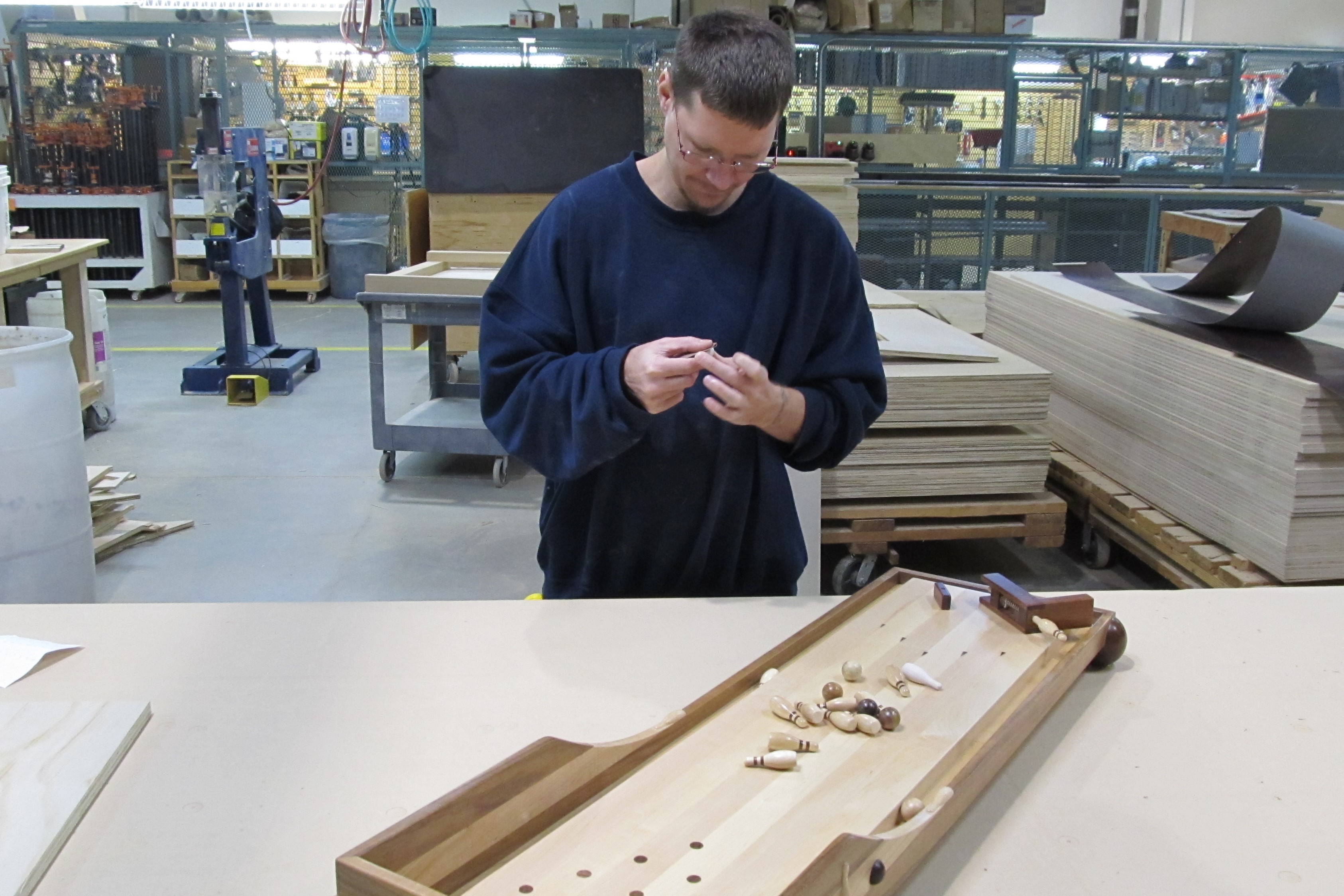 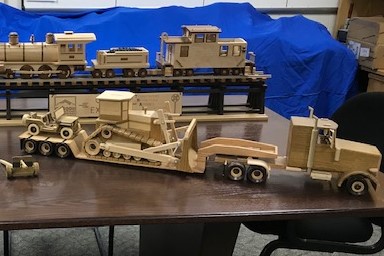 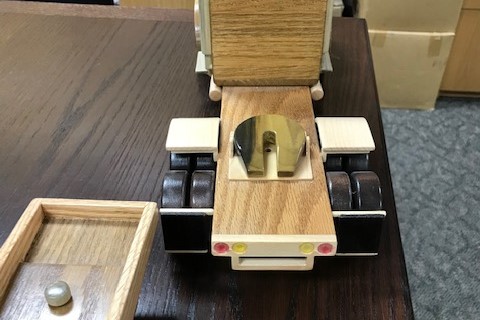 Details on Every Level 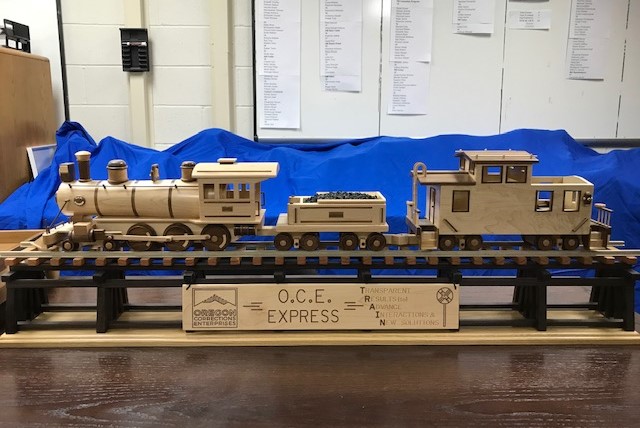 Rising from Trainee to Craftsman 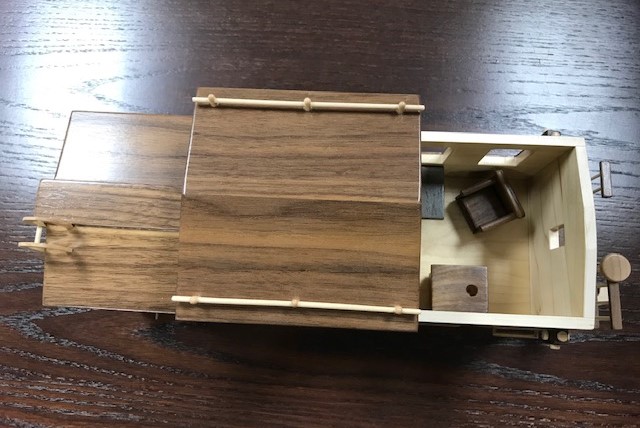 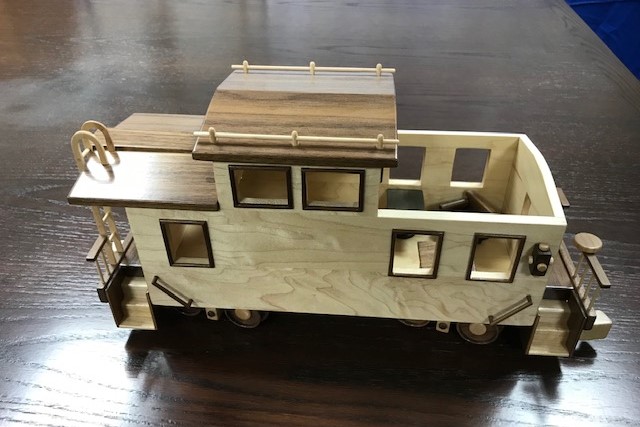 Finding beauty in the scraps