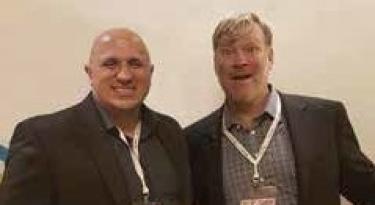 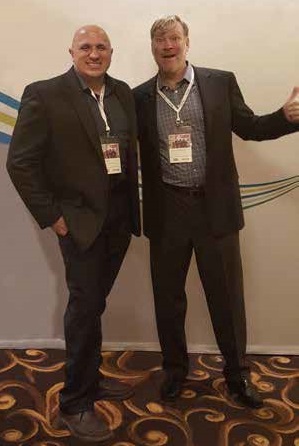 From left: Joe Narkin and his manager Wil Patterson.

He grew up in a home where one parent was abusive and the other the epitome of love. He's not sure why he chose to follow one over the other. His downward spiral of self-hatred culminated in a failed relationship, a bank robbery, and an attempted suicide-by-cop. The police officer realized the truth of the situation: Joe was crying out for help, even though he didn't realize it at the time. Joe says it was the first time he became aware of what he called “the beauty of humanity."

Joe struggled the first two years of his prison sentence, trying to figure out who he was now that his living arrangements had drastically changed. Learning meditation techniques during a period spent in segregation, Joe finally found the peace he needed and made the life-altering decision never to hurt another human being again. His newfound peace led to better behavior in prison. Better behavior led to a unique training opportunity: the OCE Contact Center. In this program, he experienced a positive work environment, learned to work as part of a team, found self-expression, and developed the skills necessary to interact with the public in a professional manner. He participated in the program for five years, missing only one day due to illness.

The manager of the customer to which Joe's team was assigned came into the prison often and treated everyone as if they were valued employees. As Joe's skills expanded into marketing, the manager offered Joe a job to step into the moment he released from custody.

Continually exceeding expectations, Joe now lives on the east coast, is the Director of Business Development, and is on the path to become Vice-President of Operations. He learned sign language while in prison and continues to volunteer in his local community, signing for those in hospitals and for deaf children who want to talk to Santa. Joe enjoys helping his company prosper and employees succeed both personally and professionally. But that is not the only way he defines success. “Success is being the most helpful person you can be to humanity and the people in your life, being able to sleep at night without a knot in your stomach, and living a more genuine existence. It's being a better son, good husband, and good father." For Joe, success is being a piece of the beauty of humanity.